While I hope I have always been polite about it, I’ve never had much time for things like mindfulness or meditation. They ring of new age phooey, embraced by enthusiastic zealots who dismiss the very idea of any evidence beyond their own beliefs. Courses in these subjects have always seemed at best harmless, at worst a tax on the gullible.

Well, I got that one wrong. A recent review by a group of neuroscientists from Canada, Germany and the USA brought together the findings of research into the impact of meditation and mindfulness classes on the adult brain, with impressive results. For anyone concerned with lifelong learning, their findings are consistent with the view that our brain is not fully formed at the end of adolescence, followed by a long phase of dreary decline, but continues to change during adult life.

One of the studies reviewed compared people who had taken an eight-week mindfulness stress reduction class with a control group who had applied for the class and gone onto the waiting list. Longitudinal scans of their brains showed that course participation was associated with changes in gray matter concentration in brain regions involved in learning and memory processes, emotion regulation, self-referential processing, and perspective taking.

Other studies reviewed consistently showed that meditation caused changes in the brain regions concerned with memory consolidation, meta-awareness, and self and emotion regulation. While the evidence was less abundant, the researchers concluded that there were gounds for believing that meditation interventions can also offset age-related cognitive decline.

This research is potentially of huge importance for our understanding of lifelong learning. Earlier studies, such as the well-known case of London taxi drivers, have already shown that the adult brain is plastic – that is, it continues to change throughout the life course. The mindfulness research not only confirms this, but shows that what is true for the right hippocampus in taxi drivers is also true for other parts of the brain; and that planned interventions can cause brain change.

While the importance for lifelong learning is clear, what this means in practice is far from simple. There is a good news story here about resilience and the avoidance of cognitive decline, which is of obvious significance for policy-makers and employers, who might otherwise be as sceptical about the value of these interventions as I was. It might also be useful for the public, particularly older adults, to understand why they need to exercise their minds as much as any other muscle. But what none of this tells us, at least so far, is what to teach and how best to teach it. 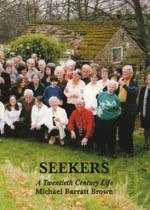 Michael Barratt Brown was the first Principal of Northern College, a residential college for adults which opened in September 1978. I was lucky enough to take one of the first jobs at the College, and taught there from 1978 to 1985.  Working with Michael was a baptism of fire for a young and inexperienced lecturer, particularly as he had no patience with the belief that you could learn anything about teaching from books or training courses.

I already knew of Michael before joining the College. His political work in the peace movement and in the campaign for industrial democracy were well known; he often co-authored with Ken Coates, another adult educator who like Michael had left the Communist Party in 1956, and who became quite a high profile figure in the Labour Left. I had also met Michael, through my Warwick mentor Royden Harrison, the historian and an old friend and political comrade of Michael’s (Royden also wrote a reference that was, I suspect, instrumental in getting me the job).

Michael was an inspirational figure who was capable of haranguing the College staff – and students – when things didn’t go entirely to his liking. My first experience of Michael in rant mode was when the Deputy Principal, in Michael’s absence, declared the College closed during a snowy cold snap; Michael was furious, spluttering that if he could get in to the College then there was no reason to close it down. He then went out skiing.

To be honest, his harangues tended to cause more amusement than anxiety. Yet, as you might expect of someone with his wartime experiences, there was real toughness in the man – and indeed there had to be. For the first few years of its life, the College battled to survive. The Sheffield Conservative Party was particularly virulent in its attacks, both through its one local MP Irvine Patnick, a nasty piece of work who fed misinformation to the media in the wake of the Hillsborough disaster), and through the local Chamber of Commerce. And all this during the Thatcher years.

Michael was robust in his defence of the College, and disarmingly charming with its critics. He was also capable of puncturing others’ self-importance, usually employing his sly sense of humour. I remember him one chairing a disciplinary hearing involving two students, both activists in the Yorkshire Area of the National Union of Mineworkers, who had been involved in a fight. It was a tense and difficult occasion, with claim and counter-claim over the origins of the dispute, which Michael defused by asking “And what exactly is a pillock?” To this day I’m uncertain whether he genuinely didn’t known what the word meant, but it brought us all back to our senses.

He worked hard and expected others to do the same. He was an enormously productive writer while contributing a full teaching load and doing all the networking and admin that came with the job. He also drank hard: the College then expected all its teaching staff to serve as residential tutors once a week, and occasionally I’d find him in his study at night, polishing off a bottle of red wine while writing an article or a pamphlet.

He was capable of enormous generosity, supporting students in terrible hardship with ‘loans’ (rarely repaid) from his own pocket. As some students never tired of pointing out, he could well afford to be generous, though much of his wealth came from canny investments. I did once ask him about the ethics of a Quaker Marxist gambling on the stock market; his response, with a grin, was “Why be an economist if you don’t use it?”

In many ways Michael became an adult educator almost by accident – or at most through planned happenstance – as I did. His formal education had been richly supplemented by a lifetime of political activity, but he had taught for the WEA before joining the Extra-Mural Department at Sheffield University, where he was drawn into teaching on the miners’ day release programme. He thought that adult educators were made through experience; when I asked about financial support to undertake an OU course called Education for Adults, he snapped at me: “Why on earth would anyone want to study adult education?” I paid for the course myself (and thoroughly enjoyed it).

Robin Murray has written a beautifully worded obituary of Michael for the Guardian. And there is plenty more detail in Michael’s autobiography for anyone who is interested in his remarkably varied and influential life. There is much more to be said, and critiqued, about his life and work, and what it tells us about the turbulent trajectory of British adult education. But now is a time for mourning and celebrating, and sharing personal memories of someone who contributed so much to the lives of those around him.

On 8 December 1940, the 1st Battalion of the Construction Corps marched through Dublin. The 408 men wore uniform, had undergone initial training at the massive Curragh army camp, carried a blue flag bearing the Corps emblem, and were led by the Number 1 Army Band. As they passed Government Buildings on Merrion Street, they saluted the Taoiseach, Éamon DeValera, and four of his Ministers.

The Construction Corps was in fact a labour corps, recruited from the unemployed. Bryce Evans, writing in the Irish labour history journal Saothar, traced its origins to proposals from Seán Lemass, who had taken a keen interest in imitating the Civilian Conservation Corps, part of Roosevelt’s New Deal. With rising unemployment following the outbreak of the Second World War, Lemass’ ideas were revived. The Construction Corps, run by Ministry of Defence, was the result.

Recruitment, of young unmarried unemployed men, began at the start of October 1940. As in Britain, the authorities argued that work, decent food and camp life would together help rebuild men’s bodies after the damaging effects of unemployment. The men lived in hutted or tented camps, far from the cities, and worked on land reclamation or peat digging in areas such as Connemara. And although born of war-time conditions, it lasted until 1948.

The Dublin parade took place early on in the Corp’s life. It is particularly interesting for me because this was such a public event, watched and applauded by thousands of Dubliners. There was much comment on the men’s bodies: according to an Irish Press reporter,

No onlooker could have failed to appraise these young men, their good colour, fitness and their smart military bearing.

The reporter duly drew a contrast with the unemployed ‘street corner’ city boys who were now ‘erect, healthy and determined’. In similar vein, the Catholic Herald thought that ‘This is what weakening bodies and minds have needed too long . . . we may hope for a better manhood when the trial is over’.

Ireland’s work camp system was distinctive, developing as it did in a nation where the land had historical resonance, where wartime conditions were leading to a steady flow of young men to Britain, and where severe economic disruption led to a series of significant but poorly co-ordinated government interventions. Nevertheless, as anyone familiar with work camp systems will know, manhood and health were pervasive themes: working men’s bodies degenerated if left idle for too long – hard work, solid food and outdoor living could ‘recondition’ these weakened frames.