I found this advertisement in a local guidebook, published in early 1946. I find it interesting for a number of reasons,  not least that the Church Army clearly expected to encounter similar conditions after WW2 to those it faced in 1919, with large numbers of bored and rebellious servicemen (and in 1946 women) cooped up in camp under military discipline, while tens of thousands of veterans returned to unemployment, emigration and loneliness. 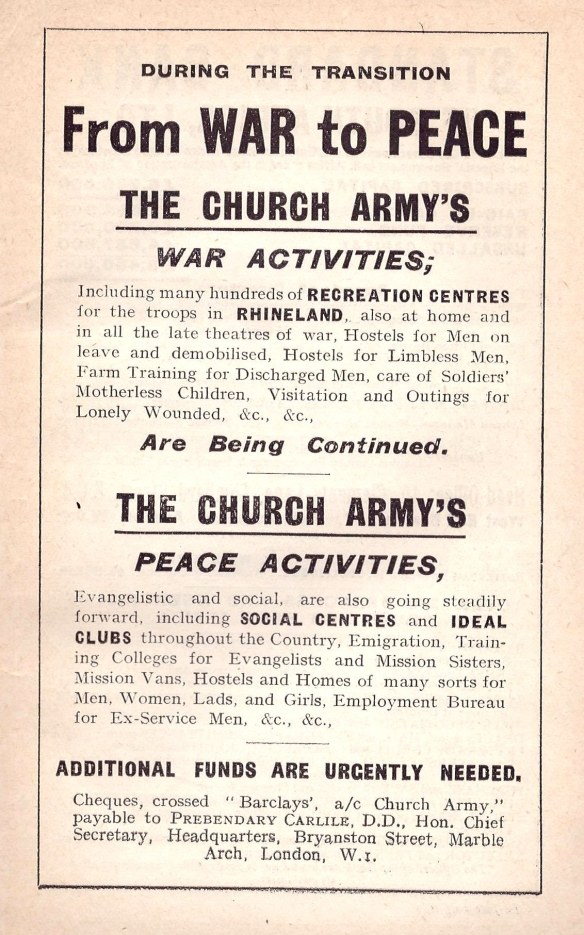 In fact, however harsh the conditions experienced in austerity Britain, the economy absorbed most of the returning veterans, and the emerging welfare state replaced many of the functions previously performed by charities. The Church Army, which had staff and volunteers providing services in the armed forces and working in air raid shelters at home, found a new post-War role in youth work. I do wonder, though, whether  it was involved in providing accommodation during the desperate housing shortages of the late 1940s.

In particular, the Church Army lost its role in training emigrants. It had founded its first farm training colony in 1890, less than a decade after its birth. Its leader Wilson Carlile always intended the new colony, at Newdigate in Surrey, to expand its activities to training unemployed Londoners for emigration to the Dominions, but instead it turned its attention to providing a rudimentary farm training for inebriates.

In 1905 the Church Army sold Newdigate after acquiring a second, larger estate at Hempstead Hall in Essex, where it started a farm training colony, preparing unemployed men for emigration. By 1917, it was already focusing its attentions on discharged oldiers and sailors, and was still described as a Church Army training farm in Kelly’s Directory for 1937. I’m  not sure what happened to it during WW2, but by the late 1940s it was a remand home for boys, which in turn closed in 1950. These days it seems to be an upmarket bed and breakfast.

As ever, there’s far more about the labour colony movement in my book. Check it out if you want to know more.

All nationalist movements view themselves as guardians of their country’s heritage, and woe betide those who point to anything that does not chime with the “true” history of the land. Scotland is no exception, as we can see from the storm over Gavin Bowd’s newspaper article about Scottish fascism. I’ve not yet seen his book on this subject, but Bowd is a professional historian, and I expect to see him set out his evidence and name his source material.

Some of that evidence is well known. Indeed, I have stumbled across some of it while looking at the various work camp systems that were scattered across these islands before the 1940s. Nationalist campaigners in Scotland tended to see the main ‘other’ as the Irish, and they found a broad audience for their views. This complicated their views on work camps, which could be seen as vehicles for emigration of fine Scots (bad) or as training schemes to prepare Scots for jobs at home or life on the land (good).

The Reverend Duncan Cameron, chief author of a report for the Kirk on The menace of the Irish race to our Scottish nationality, made himself available for speeches and lectures. Among other organisations who invited him was the City Business Club in Glasgow, who in 1926 heard him call for ‘drastic measures’ to ‘safeguard the Scottish race in their native land’ from the Irish.

A decade later, Charles Davidson spoke to the National Party in Elgin of the racial deterioration caused by government training policy: ‘The finest went overseas’, he said, and were replaced by immigrants ‘not of the same stock, class or quality’. Meanwhile, a National Party delegation to the Scottish Office complained that ‘the flower of the race’ was being encouraged to leave home in search of work, while the government’s work camps were filled with inferior migrant stock.

So it isn’t hard to find plenty of examples of nationalist movements in Scotland that were bigoted, racist and sympathetic to the radical right. We can also find similar movements in England (part of my book is devoted to the work camps associated with Rolf Gardiner, who was profoundly anti-Semitic and thought the people of Cleveland and North Yorkshire were to be admired for being of ‘robust Scandinavian stock’. And of course we can find such people across much of Europe – just as we can also find Scottish, English and indeed German and Italian anti-fascists.