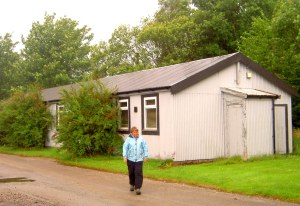 Back in November, the Dunoon Observer reported on my research into British work camps, focusing mainly on the Glenfinart Instructional Centre in Ardentinny. The Ministry of Labour opened the Centre in 1934 as a summer camp where young unemployed men were ‘hardened’ through a programme of heavy manual labour, supported by health care and a solid diet. Most of the work involved preparing rough scrubland and pasture for planting, and the area is now largely covered by a very attractive forest.

Subsequently, a local reader contacted the paper. Mr Ian MacArthur’s grandfather was manager of the Ardentinny Temperance Hotel during the period when the Centre was open; and his father, John MacArthur, found work in the Centre as an instructor.

In the Dunoon Observer for 12 December 2014, Mr MacArthur described the background to his father’s appointment as follows: “He worked with a coke-raising forge, the fumes of which eventually poisoned him after a couple of years and hospitalised him”. After a period away from the west coast, John MacArthur applied for the post at the Centre.

The Ministry of Labour had approved this position in February 1934, but decided as an economy measure to merge the roles of woodwork instructor and metalwork instructor into one role. In May 1934 the Ministry listed the wages and salaries of its staff at the camp; the woodwork instructor was being paid 55 shillings weekly, significantly above what local farmworkers would have received at the time and slightly more than skilled engineers were receiving.

Mr MaccArthur also remembered his father saying that the IC manager had arranged for the well-known boxer Benny Lynch to visit the camp, where he fought an exhibition match with the physical training instructor. He doesn’t say who won this encounter, but Lynch was the world flyweight champion, and a popular Glasgow hero. He was then at his peak and his visit to the camp must have been sensational for staff and trainees alike. I’ve also been told that the heavyweight Tommy Farr (“the Tonypandy Terror”) also visited and fought in one of the Welsh camps.

Such memories are, of course, second hand, and we need to check them against other sources. My judgement is that Mr MacArthur’s account broadly confirm two features of the Ministry of Labour’s IC system.

First, the camps provided a fairly limited programme of skills development. As well as woodwork and metalwork, they usually offered some basic literacy and geography, but their major focus was on a regime of heavy manual labour, with the aim of building strength and stamina.

Second, those who ran the camps organised a range of recreational activities for the trainees, from cinema to but the ideal masculine body was central to many of these activities. Given that Benny Lynch symbolised the idealised virile physique, it is sad but ironic to report that his career ended in alcoholism.