I’ve just been listening to Dan Snow’s interview with Jacqueline Riding, author of a magnificent history of the Jacobites who now has a new book out on Peterloo. I’m an admirer of her work, which includes her roles of historical adviser to two much-loved Mike Leigh movies, Turner and Peterloo. 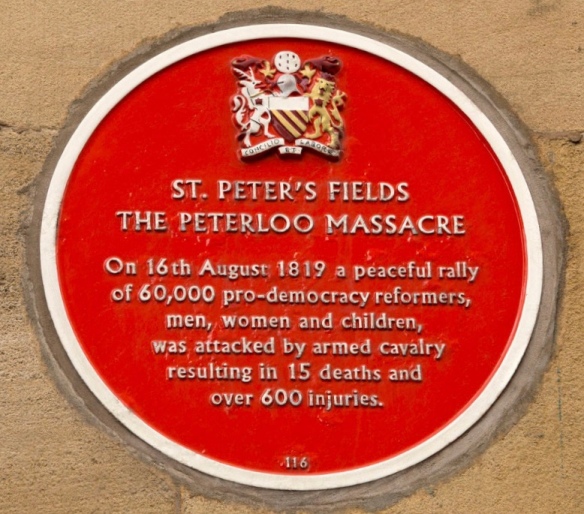 The red plaque on Manchester Free Trade Hall was itself the subject of controversy after it replaced a blue plaque that ignored the dead and injured.

Most of the interview covers the background to the 1819 massacre, but Snow also asked her what she actually did on the films (she has also blogged on this topic). As well as generally advising on what we can understand from the available evidence, she rummaged through the archives to provide accounts of who was in the audience that day and what preceded the public meeting, dug up copies of speeches, provided a timeline, read and commented on the ‘script’ (something more like notes in Leigh’s case) as it emerged, advised on casting, worked with the actors, and answered questions from the costume, props and scenery departments.

Snow also wanted to know whether there are moments in the film that, as historian, she found inaccurate or misleading. Riding carefully dodged a direct answer, pointing out that her book is where she had put the historical work, for those who wanted to know more. I’ve yet to get my hands on a copy, but I enjoyed and was impressed by the Jacobites book, and look forward to the new study.

Meanwhile, what struck me was that the historical adviser really has to put in the hours. Riding is a trained historian who is skilled at identifying and evaluating source material, and an eloquent presenter of her findings, but there must be plenty of others with those skills. Rather few also have the skill set needed for working with filmmakers, as well as the requisite public profile, the flexible time (Riding has been an independent scholar since leaving her role as director of the Handel House Museum), and of course a very good agent.

What I particularly admore is her capacity for combining high level scholarship with the ability to reach out to a broad audience. In our times, we need more scholars like her, though I hope that they will include plenty who continue to work in universities, museums, libraries and other bodies with multiple educational functions.