Living in Cologne didn’t exactly at put me the centre of the rugby world, but I found it easy enough to satisfy my cravings. Six Nations matches were shown in several bars (none of which were worth visiting on any other grounds) and at the local clubhouse of ASV Köln. And I also watched ASV Köln, not that my support them much good: they finished bottom of the 2. Bundesliga West. In fact, in recent years the men’s team has done rather poorly, while the women’s team has been relatively successful.

Last week, though, ASV Köln won a prize. Three women players launched a project last year under the name of Rugby United with the aim of exploiting rugby’s reliance on team building to bring people together, and foster what they described as the game’s ‘central values’ of ‘Disziplin, Respekt und Fairplay’. They also used what in Germany is called ‘the third forty minutes’, and in the UK is an opportunity for a pint, as a time for discussion and interaction.

The project took time to get under way. Unsurprisingly, the idea of rugby itself isn’t exactly familiar to many people living in the refugee hostels (which range from old barracks to sports halls), let alone rugby involving girls as well as boys. The project’s supporters have to raise money for playing kit, and for the shared meal after sessions.

Thirty people, between the ages of 3 and 46, turned up to the first training session. The project’s mid-term goal is to integrate the refugees gradually into the standard club training sessions, with a view to eventually recruiting the best players into ASV’s teams. The prospects look reasonably good, with 20-30 refugees turning up to sessions. And as well as attracting the attention of the city’s mayor and sporting community locally, three of the younger refugees were selected as mascots for the German national side.

I have no idea what Cologne’s wider refugee communities make of this development. Parents must be slightly bothered when their children come home with bumps and bruises and tales of on-pitch arguments, and I imagine that not all communities welcome the very idea of women’s rugby. On the other hand, children’s lives in the refugee homes can be mind-numbingly boring, with few facilities and a high turnover of social work staff. And as in many German towns and cities, the rugby club is part of a wider sporting association – in this case Athletik Sportverein Köln – with a history of community engagement (including participation in Cologne’s gay pride celebrations).

Of course this is a relatively small project. With the best will in the world, an amateur rugby club cannot involve more than a handful of the estimated 12,000 refugees living in Cologne. And you could argue that the recruitment of potential players, along with the accompanying publicity, is very much in ASV’s interests (interestingly, some village soccer clubs in Germany are able to field a team mainly thanks to their connections with refugee communities).

All the same, hats off to the Athletik Sportverein Köln, and high respect to the three players who made this project possible. And to the rest of the rugby community, especially in the cash-rich Six Nations: more of the same, please. Meanwhile, I wish ASV Köln Rugby every success this season, on and off the pitch.

I have just 21 weeks to wait before the start of the Rugby World Cup. To while away the time, I want to remember a rugby-playing Marxist from New Zealand who in 1934 taught the haka at a summer camp for unemployed men. 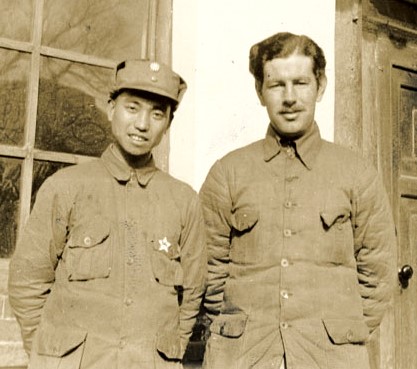 James Munro Bertram was a Rhodes Scholar at Oxford when he volunteered to spend his summer with the Universities Council for Unemployed Camps (UCUC). Born in Auckland on 11 August 1910 to a Presbyterian family, he came to England with left-wing views and a training in journalism. He graduated in 1934 with a first in English, then took a second class degree in modern languages in the following year.

UCUC, though based in Cambridge, drew support from a number of English and Scottish universities, and is best understood as part of the broader tradition of student social service, sharpened by the political and economic divisions of the 1930s. Its founders came from a broadly Christian milieu, as did Bertram.

Launched in 1933, UCUC organised some ten work camps during the long summer vacation in the following year. One camp was in Eynsham, on the estate of the fabulously-named Col. Raymond ffenell, a former gold mine owner who used his estate at at Wytham Abbey to promote charitable causes. As was typical in UCUC camps, it involved a small group of around a dozen student leaders and some 60 unemployed men, who worked together to prepare a camp site for the Girl Guides, including digging out an area for use as a swimming pool. 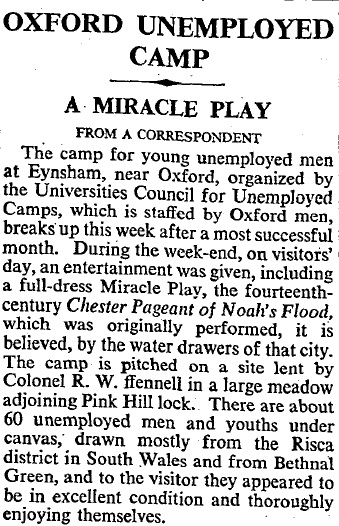 The camp leaders also organised a visitors’ night, inviting Col. ffenell and other local inhabitants for an evening’s entertainment. Such events were quite common in UCUC camps, and had a number of different functions; the organisers certainly hoped that they might help reduce local suspicions of the unemployed; they also aimed to build bonds between the unemployed and the students; and they provided an opportunity to raise funds from the audience.

The high point of the Eynsham visitors’ night was Noah’s Flood, a medieval miracle play, performed on Pinkhill Lock and lit by car headlamps. The play was directed by the leading Chaucerian scholar Nevil Coghill, who also featured earlier on the programme as a violinist. The acts also included songs, humour (stand-up), animal mimicry, and a ‘Maori dance and war cry’ performed by the men of Tent 9.

First half of the Visitors’ Night programme

James Bertram was leader of Tent 9 (in keeping with the UCUC principle of allocating one student to each tent as its leader). The decision to teach the men to perform the haka reflected his keen interest in rugby, while presumably it was his political beliefs that led Coghill to cast him in Noah’s Flood as a somewhat ahistorical ‘Red Shirt’.

What was a New Zealander, studying English, doing at an unemployed camp? Bertram was a Christian and a convinced socialist, and he reportedly decided to join UCUC after supporting the Hunger Marchers as they paraded through Oxford. As a democratic Marxist he opted to join the Independent Labour Party rather than the Communist Party, starting an ILP branch at the University. After leaving Oxford he worked as a journalist, becoming a foreign correspondent in China before eventually being imprisoned by the Japanese. Subsequently he obtained a senior lectureship in English at Victoria University College, Wellington, where he taught until his retirement.

Bertram died in 1993, and I’m sorry that I never met him. He probably wouldn’t have agreed with my view of the work camps as a form of intervention on the male body – but he sounds as though the discussions would have been interesting and informative.

I am a bit of a rugby fan. Well, okay, I love the game, for all its flaws. And I love it in spite of the dramatic changes brought about by professionalisation. So far – touch wood – the game still has its roots in the community, and top flight internationals still acknowledge a connection to the minis, the age grades, and the women’s teams, as well as to the volunteers who nurture the world-beaters of the future.

And what, you ask, does this have to do with adult learning? Unlike soccer stars, rugby’s top professionals know that, unless they are remarkably lucky, their earnings from the sport will not be enough to live on afterwards. If they are unlucky, their career will end prematurely. So they need to think about what comes next.

And that’s why adult learning matters for elite rugby players. I’m aware of two current Lions players – the very best that the Northern hemisphere has to offer – who are taking part-time degrees as mature students. Alex Corbiseiro, the prop forward who is soon to join Northampton Saints, is studying history at Birkbeck, University of London. Ryan Grant, former soldier and Glasgow prop, is studying environmental science with the Open University.

There may be other Lions players who are studying while playing professional rugby – if so, I’d be interested to know about them. Meanwhile, Corbiseiro and Grant should remind us, if we need reminding, of why it is so important to have a thriving part-time system that allows adults to return to higher education without abandoning their career. At a time when part-time study is at greater risk than for generations, this is a critical message.