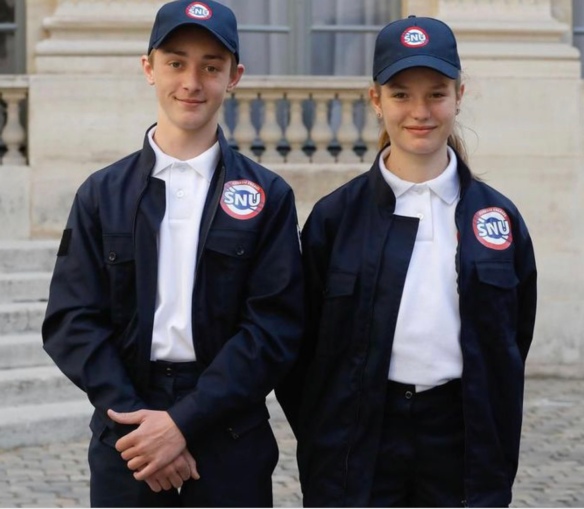 Active citizenship has been a prominent theme of the Macron presidency. I posted recently about the way in which the French government is using adult learning accounts to promote civic participation. And it is now piloting universal national civic service for young people.

Macron launched the idea of a service national universel during his election campaign in March 2017.  His aim, he said, was to ‘recreate a meeting-point for the whole nation’, to be undertaken by all young people in the same age group regardless of faith, class, ethnicity or gender. It replaces military service, abandoned twenty years ago by the Chirac government, and the French military has no desire to see it return.

Currently, the newly-established service national universel (SNU) is being piloted by 2,000 16 year old volunteers in 13 departments. After a two-week induction phase they spend 12 days working in settings such as retirement homes, voluntary association, or voluntary fire brigades. Participants wear a navy blue uniform, with a tricolour roundel, and must start each morning by singing the Marseillaise while the French flag is raised.

While participation in the pilot phase is voluntary, the scheme is intended to become universal and compulsory from 2022-23. According to a recent survey, 67% of French 18-24 year olds support the idea, while the majority of the adult population sees it as a valid way of achieving its goals of strengthening civic culture, increasing national cohesion, promoting social mixing, and encouraging the young to value the national patrimoine culturel.

The French scheme forms an interesting contrast wth Britain’s National Citizen Service. Part of David Cameron’s Big Society initiative, and launched in 2011, participation in the NCS has always been voluntary. Like the SNU, it is massively expensive,  reportedly accounting for 95% of the government’s youth service budget, and NCS recruitment continually falls below target. I’ve heard no reports of flag-raising or anthem-singing, and there is no standard uniform.

Evaluations of the NCS are at best mixed. However, one study of participants found that the exerience led to an increase in affective inter-ethnic ties, with growth in inter-ethnic friendships being particularly strong among participants from the least multi-ethnic neighbourhoods. I suspect that this will also prove one of the main positive outcomes of the SNU in France. But couldn’t the same goal be achieved just as effectively in both countries by investing in high quality youth services?