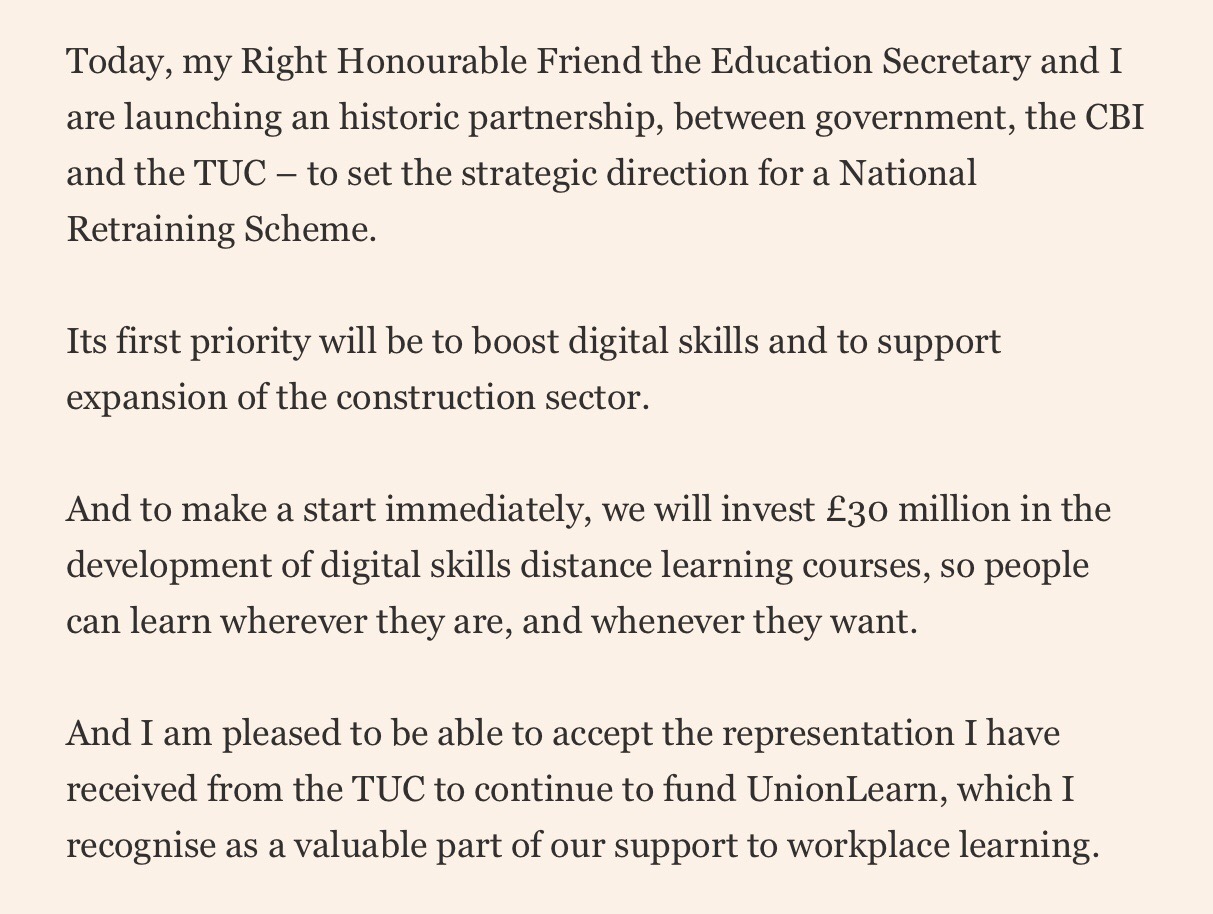 Skills featured prominently in the budget debate this year. At least, they did on the Government side of the debate: Philip Hammond, the U.K. Chancellor (or Finance Minister), made skills a central plank in his strategy for improving productivity and growth. The leader and other senior figures in the Labour Party have so far focused on other issues, notably housing, poverty and unemployment, though they may get around to addressing the skills proposals later on. And I will also try to blog on the issues of productivity and skills in the next few days.

Meanwhile I wanted to draw attention to Philip Hammond’s mention of the trade union movement and employers’ representatives. Apparently the Confederation of British Industry and the Trades Union Congress have formed a partnership with the Government over the design of a National Retraining Scheme. It will start relatively modestly, it seems, with investment in digital and construction skills. And it includes continuing support for UnionLearn, which seems to me a good idea.

To be honest, I found myself rather surprised by this section of Hammond’s speech. Three-way partnerships in training policy between state, employers and unions are well established in many European countries, including Germany and the Scandinavian nations. And they were once normal in the U.K., particularly after the 1964 Industrial Training Act set out a national system of tripartite sector-based Industrial Training Boards. Hilary Pemberton argued that this legislation failed to transform deep rooted cultural attitudes, making it easy for the Thatcher Government to do away with it.

Whether Hammond’s National Retraining Scheme will do any better is a moot point. It clearly represents a much more modest form of tripartism than the ITBs, but perhaps this will prove an asset – particularly if the Retraining Scheme is linked firmly with measures to promote skills utilisation. The history is less than promising, but if the Government is able to persist with the Scheme, it might prove very interesting indeed.

The Universities Association for Lifelong Learning has chosen to focus on ‘Research, Policy and Practice‘ for its 2018 conference. You will find the call for papers on the UALL website, and it promises to be a lively and constructive event. Given the poor health of adult learning across the four UK nations, it also seems particularly timely.

I’ll be interested to see how researchers and practitioners now understand and address this triangular relationship. Ideas of evidence-based practice have not often found an enthusiastic reception in adult or further education, partly because of a (not unreasonable) suspicion of outside experts floating in to a field where expertise so often draws on experience, partly because ‘what works’ can change dramatically between one context and another, and partly because some academics are rather precious about avoiding a whiff of application.

Now might be a good time for moving beyond such unproductive refusals and to develop further the existing dialogues between research and practice over the types of evidence we need, and how best to use it. Academic researchers are now under considerable pressure to show that people read and use their findings, and practitioners are often required to justify their practice. This offers quite an opportunity.

As for policy, though, where do you begin? Evidence for the benefits of adult learning is not hard to find. My own overview of UK longitudinal studies – which show marked gains for individual learners and their communities, as well as gains for employers – is far and away my most frequently downloaded publication. The OECD survey of adult skills, usually known by its acronym of PIAAC, provides an international insight into these effects. UNESCO devoted its Third Global Report on Adult Learning to a review of research, and found clear support for positive effects on health and well-being, employment and the labour market, and community life and social capital.

So in principle it should be easy to persuade policymakers to consider treating adult learning as an intervention with a proven record of success. In practice, this has not been easy. The evidence base is still not as strong as it could be (for example, is adult learning more effective and less costly than other ways of achieving the same effects?), and I’m not sure we have still figured out what the distribution of benefits might mean for funding the system.

A second problem is, bluntly, the reluctance of policymakers to listen to the evidence and discuss the implications. Very few politicians, employers or senior civil servants have much direct experience of adult or further education. There are exceptions, of course: David Blunkett was an unusual Secretary of State in that he had been an adult student, is an alumnus of the Huddersfield postgraduate certificate in further education, and taught in Barnsley College. And among current MPs, Chi Onwurah and David Lammy for Labour and Caroline Dinenage for the Conservatives have all actively promoted debate over greater public support for adult learning.

So there are grounds for hope, but any chance of effective influence on policymakers will require a much stronger and long term commitment than most researchers in adult learning have shown so far. It will also require dialogue with politicians while in opposition, rather than contacting them for the first time when they are in power. In England, this is something that NIACE used to be very good at, and I hope that the Learning and Work Institute can build on this. But the issues are too important for researchers to hope that they can leave the job to others.